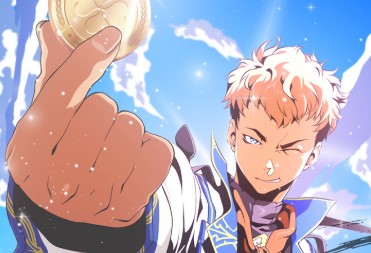 Today we will be talking about I’m Destined for Greatness Manhwa Chapter 46, but let’s have a recap of the previous chapter first.

Finally the warriors came to defend their king. They are not going to let the invaders escape easily. Antonio, knowing they were surrounded, agreed to take his men and withdraw. Tae Hyun was pleased when Sadikh Order decided to withdraw because his HP was already below 20%. Yet, he had to acknowledge the Sadikh Order deemed him their sworn enemy.

After the incident, the palace was damaged and the King wanted to rebuild the palace before retaliating. People were being asked to join in a quest to rebuild the palace after the incident. If they can replace the damaged arts with the new one, they will be handsomely rewarded. While working tirelessly to restore the palace, they witnessed a quarrel between the guard of the palace and the blacksmith guild. Workers had been discussing amongst themselves about this. Elsewhere, Tae Hyun watched his little dragon eat a piece of cake to regain his strength. Afterwards, Tae Hyun and other adventurers were summoned to the palace. It turns out that the King issued  a quest. The holy order was to destroy the Sadikh Order.

Success was evaluated either through talent or hard work. Anyone with talent would undoubtedly succeed, while the one who chooses the hard work will take a while to succeed. Kim Tae Hyun was just a weird man. At roundabout way, he aim for success. During online game, he opted for small jobs which made it harder than it should be. Nonetheless, he was just trying to be the best, and he’d spend all he had to get to the top. “I will win this game with my skills!”

The King issued a holy order to wipe Sadikh Order out. This will provoke a war between nations and we could see several alliances forming in the next chapter before they go to Sadikh. I’ve already start to wonder what will happen next. Let’s just wait quietly for the next chapter to come.