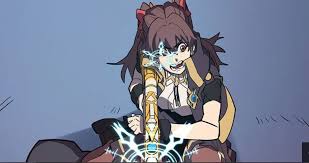 Good day, manhwa lover! If you’re waiting for A Returner’s Magic Should Be Special Chapter 113, we have information for you. But first, let’s refresh our memory and take a look at the previous chapter!

A Returner’s Magic Should Be Special Chapter 112 Recap

Desir ‘s party was there, and they were shocked to see the mother worm. Adjest was really angry at the Blue Moon party, and when Mother Worm threatened, she could handle it easily. Subsequently, Desir said that the other great worms would soon parade towards them, because Mother Worm was like the leader of the worms. Kashu, on the other hand, was really dead, not just eliminated. The Blue Moon Party therefore appointed Arzeria as its leader to replace Kashu. As Desir had a plan, Arzeria also agreed to follow Desir. That being said, all the parties have now been divided into two teams to hit Mother Worm. Supposedly, Desir was still waiting for the arrival of another party. This was the Red Dragon Party, led by Radoria. Now, the top three parties were fighting with Mother Worm. At the end of the chapter, a mysterious man said everything was going according to his plan.

A Returner’s Magic Should Be Special Synopsis

Humanity has been confronted with the most devastating life in history. Desir Arman is one of the remaining six human survivors. The six tried to clear the final labyrinth, but ultimately it failed, and the world came to an end. Yet when Desir felt he was going to meet his end, it was thirteen years ago that the future was unveiled before him. Desir has returned to the past, back to the time when he studied at Havrion, the nation ‘s finest academy of magic. He is reunited with his best friends and prepared to change the past to save the planet and the loved ones Three years after the dawn of the Shadow World!

A Returner’s Magic Should Be Special  Chapter 113 Spoiler

Just after they had other reinforcements to help, a mysterious man appeared. Who was this guy, huh? Why did he say that all was as he had planned? In the next chapter, we’ll see how all the parties are battling the mother worm together. Okay, let’s just wait for the next chapter.

A Returner’s Magic Should Be Special Chapter 113 Release Date

If you’d like to read A Returner’s Magic Should Be Special Manhwa chapter 113, next week will be the time. This manhua has just published chapter 112 this week, so the next chapter will come out soon. Well, happy reading all!