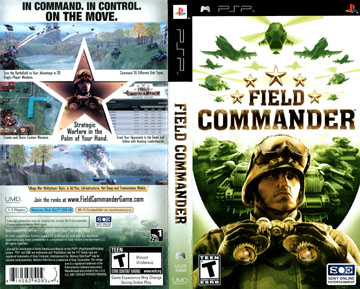 Once again, nations at the brink of destruction and chaos unite, and enlist the assistance of a top secret military institution, which you are now a part of. Your assignment as a newly recruited Commander is to confront the terrorist and foil their plans for world domination. The developers of this game fused the successful mechanics of the Advance Wars series, with new age technology, to bring you the latest and greatest turn-based strategy game for the PSP. Advance Wars was boot camp, now prepare yourself to engage the enemy at real WAR!

For those who didn’t have the opportunity to enjoy Advance Wars: to put it simply, Field Commander plays much like chess. The simple board; however, is replaced by numerous battlefields filled with mountain, lakes, forests, and the like. Moreover, each local has specific advantages and disadvantages, for example: hills offer snipers and other infantrymen, wider attack areas and better cover; however, their speeds are decreased quite significantly. Furthermore, the mere six types of pieces found in chess are replaced by approximately 30 differing types of soldiers and vehicles (tanks, rocket launchers, half-tracks, scouts, etc.) which make the game all the more enjoyable and tactful.

Story Mode: While each level in the campaign mode may vary slightly in their ultimate goals, the general purpose is to either destroy all enemy units, or to capture the enemy’s headquarters. The story itself is, again, sufficient. Nothing great, but it’s not pointless, either.

Graphics/Sound: Both are slightly above average; not really an issue in regards to the whole of the game.

Adhoc: 2 player, multiplayer. Save enabled.
Transmission: Email type play. You make a move, and end your turn. You’re foe, when able to play, turns on transmission mode, sees that its his turn to make a move, makes it, and then automatically sends it back to you. Repeat ’till someone is defeated. It works out really well, but only one game is allowed at any one time. A history of all your past games are saved on your account, unless you have them deleted.

Infrastructure: 2 player, multiplayer on-line. It takes less than a minute to make your account. The only problem I have with this is that you can’t password-protect your hosted games. So if you want to play a friend, you just have to keep kicking people off until he finally joins your game. If any game ends up taking more time than you’re able to afford (or if the connection breaks), you are allowed to save the state of the game on your turn. To play them, all you have to do is load them while in the lobby.

In a scale from “Killed In Action,” to “Medal of Honor,” I give it a “BRAVO ZULU.” If you are so much as even slightly interested in what this game has to offer, I not only permit – but advise that you to rent it. You won’t regret it. Fans of the genre, go ahead and buy it. That is all, as you were.

Worst Feature: It could have been a little longer and harder (for Advance War experts). 1-4 multiplayer, and Co-op missions would have been cool, too.
[08.85/10.00]